‘So now is come our joyfull’st feast, let every man be jolly; Each room with ivy leaves is drest, and every post with holly’ – George Withers (1588-1667)

Historians argue about the origins, retailers and restauranteurs bask in the profit-generating potential, ordinary people variously wallow in it or hide themselves away: the annual binge carries on unabated. Marking the shortest day of the year and therefore the longest night, this date in the calendar (December 21 or 22) has long been a time to live it up to the max. What else to do when all is dark, damp, barren and cold? Banish these with rousing festivity, of course!

Several kinds of greenery can be brought inside to decorate the home and Pagans do this to provide refuge for the spirits of the woodlands during the cold season. No need to limit yourself to pine trees! Include branches of bay and laurel, holly, yew, cedar, rosemary and mistletoe (caution: the berries are poisonous). Make a bouquet or wreath for a table centrepiece, fix garlands to doors and shelves, tied with brightly coloured ribbons and streamers. Paper-chains are a cheap and cheerful decoration and are easily made by children gathered around a table.

Feasting, merriment, socialising and entertainments are everywhere at Yule. Ancient Romans celebrated Saturnalia in honour of Saturn, their God of agriculture. Cries of ‘Yo Saturnalia’ rang out in the streets, role-reversals such as masters waiting on slaves, acts of generosity, etc. marked the occasion. Furthermore, the festival of Sol Invicta ‘the Unconquered Sun’ celebrated the return of the Light. For the Northern Tradition this is ‘Yule’, in English ‘wheel’ representing the turning of the year.

Musical themes for this season are plentiful. Anything that mentions the evergreens of the season, such as the lively ‘Deck the Halls’ with its simple fa-la-la-la-la chorus is ideal. Songs ancient and modern celebrate the delights of sleigh rides, dancing, gift-giving and feasting. Some people have adapted Christmas carols to give them a Pagan theme, so you might like to seek out a few of them. Mumming plays are performed in many pubs, and early in January the Mari Llwd (a mythical horse figure) can be seen in parts of Wales at street gatherings.

Here we are at the end and beginning of the Celtic year. The harvest is finished and we prepare ourselves for the long sleep of Winter. Time to put on more clothing, bring out hats and scarves, sturdy footwear and raincoats. Fire up the heating (gas, electricity, or solid fuel fires) feel the rain and gales that stir heaps of fallen leaves and drive us indoors for most of our waking hours. The Sun is low in the sky and paints the clouds crimson by late afternoon, shadows are longer, and the light seems pale compared to the full brightness of Summer.

Samhain is the festival most associated with Witchcraft and divination in the popular imagination, mostly due to the commercialisation of ‘Halloween’ (from ‘All Hallows Eve’, its Christian name). At this time the spirits of the departed were believed to return to Earth as the veil between the worlds of the living and dead is thin. Like most old festivals, nobody knows for certain when it began to be celebrated but so strong is the urge to mark the occasion that it endures. Looking at the images of death so prevalent at this time we feel the ancient pull towards our Ancestors, honouring the hereditary gifts and knowledge they handed down to make us what we are. The past is with us most of all at Samhain, and our fear of Death fades as we recall beloved relatives and friends.

A big bonfire outdoors is perfect for this occasion, with hot drinks and of course a feast. Red wine or cider are wonderful when gently heated with cinnamon, cloves, and nutmeg stirred in. These are the ‘mulled’ drinks of old. Cranberry or cherry juice make suitable non-alcoholic versions. Serve up with spiced fruit cakes and ginger parkin. Disguise yourself and fool even those who know you best! Practice divination, tell stories of those gone before, shed a tear, have a laugh, hug each another and dream…

We arrive now at the time of balance again, the day when day and night are of equal length. From this point of the year, the darkness increases and the hours of daylight are noticeably shorter. The harvest is still going on, fruits and fungi adorn field and hedgerow, birds that are our summer visitors are gradually leaving for warmer climes and others arrive for winter. Some animals are getting ready to hibernate as their food sources die off with the approach of the cold.

There is a definite sense of Nature’s bounty declining as Mother Earth prepares to sleep. Misty days prevail, the winds gather pace, plants and trees with broad leaves are turning multi-coloured to reveal what was formerly only green as the growing season ends. It is easy to feel a sadness at all this decay, but wait:– like all seasons, we know this to be transient and full of its own special wonder. The scent of Autumn is the earthy mushrooms and toadstools, the tang of poplars, apples, pears, berries and jam-making, pickling and preserving. Gather with friends, fill a tub with water and indulge in the absurdly funny game of bobbing for apples. You will get wet! Wander outside amongst fallen leaves forming a blanket for the Earth’s slumber, watch as small whirlwinds spin dried brown leaves on lawns and roadsides, piling them up in corners. Feel the crunch of those leaves underfoot, pick them up, kick them up. See your shadow lengthen and note a crispness in the air. Stargazers will enjoy longer times looking up, so layer your clothing as you get those binoculars and telescopes out. Find out about fungus forays in local nature reserves. There is so much to love about this season.

Musical accompaniments could be the sad but exquisite Sandy Denny ‘Who Knows Where the Time Goes’, and Moody Blues ‘Forever Autumn’.

Here we are at the days of ripe grains that are so much a part of the human diet. Wheat, barley, oats and rye stand proud and golden in the fields, ready to be reaped and made into bread, ale, beer, pies and cakes. Food and drink of every description since very early in human history has had grains at the heart. The word ‘Lammas’ is derived from Anglo-Saxon ‘loaf-mass’ meaning that the first bread could now be made. Deities include Demeter, Ninkasi (ancient Sumerian goddess of beer), Bacchus, Silenus and Dionysus. We may also honour Ceres, goddess of edible plants (the word cereal comes from her name) and in this part of Britain, Lugh the Celtic god of Light. The river Lugg that meanders through Herefordshire might be named after him, as ‘shining one’ are attributed to the river and to Lugh. In his honour another name for this festival is ‘Lughnasadh’ (pronounced ‘LOO-nassa’).

Perhaps the most fitting way to celebrate this festival is to enjoy the simple pleasure of a loaf of bread and a glass of ale or beer. Home-made is great, otherwise find the best quality you can afford (many non-alcoholic beers are available too, if that’s what you prefer). They go together wonderfully, fill the stomach and nourish the body. Break bread with family and friends. Drink a toast to the harvest, the farmers, reapers and millers of grain, brewers, bakers, the deities of the grain and make an offering in homage.

Seasonal songs include ‘John Barleycorn’ which tells the story of the harvest from sowing to celebrating. ‘The Barley Mow’ is a cumulative ditty that adds verse upon verse, naming the sizes of containers and sequence of people who contribute to bringing us the end product: a hearty drink. We don’t know any songs dedicated to bread-baking but maybe you could compose your own? 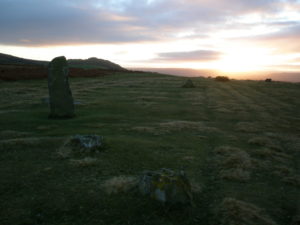 Hail and welcome all Pagans to this auspicious occasion! Called Litha by the Anglo-Saxon settlers to the British Isles, the Sun on June 21st or 22nd is above the horizon for the longest number of hours. With the climate in Britain, sometimes clouds cover the sky but the light is still noticeably there. The Druids name for this day is ‘Alban Hefin’ (Light of the Shore) and it’s astronomical and agricultural significance was of utmost importance to our Pagan ancestors who lived by the natural cycles. Our modern world with it’s harnessing of the power of electricity has brought us 24-hour light at any time of year, so it is very difficult to imagine what an awe-inspiring day this was for them. Mother Earth is in her fullest glory: greenery and flowers in staggering abundance, insects fill the air, animals and birds busily going about their lives. Crops are reaching their fullness and the harvest is soon to begin. Life appears limitless, joyous, full-on, or in the words of a song from a modern musical, “June is bustin’ out all over!”. The day also carries with it just a tiny hint of sadness, as we know that the daylight will from this point wane and gradually turn to the time of winter, darkness and cold. But be of good cheer, because the best Summer weather is yet to come!

One way to celebrate is to really get into it like an Ancient Briton, either alone or with company, by going to a wild place to pay homage to the Sunrise. If you can’t manage that, a park or back garden will do. Have a picnic, paddle in a stream, make daisy chains, enjoy being among wild plants, trees and birds. Make an offering of food and drink, pick up any litter you find. Feel the sun on your face, breathe in the scents (apologies here to anyone with a pollen allergy!) and revel in this most bounteous of seasons. Pause when the Sun is directly overhead to honour this life-giving celestial orb. When evening comes, feel the amazing power and life all around you as the Sun reclines below the horizon on this very special day.