The ‘Red Lady’ of Paviland 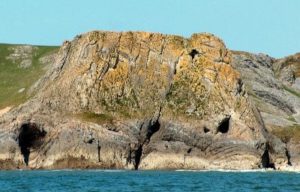 Scarring the massive limestone outcrop of Yellow Top Cliff (named after the yellow-orange lichen that decorates its rock face) on the south coast of the Gower Peninsula are numerous caves of various sizes and of differing archaeological significance. These are known collectively as Paviland. 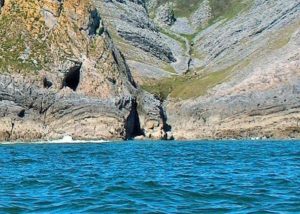 The most important cave in the Paviland Series is Paviland Cave itself (pictured above). More accurately known as Goat’s Hole (SS 437 858), the cave offers moderately easy access during low tide conditions only. A watchful eye should be kept on the sea, however, as the cave becomes isolated with the incoming tide. There is access to the cave at other tidal conditions, though these routes are far more difficult to navigate and have led to several deaths in the past. Formed by wave action, when the sea level was up to 8 metres higher than today, the cave entrance is pear shaped and faces S40 degrees West. Standing 10 metres high by 7 metres wide, the entrance leads onto a passage which continues at walking height for some 30 metres into the limestone cliff. This chamber leads into a chimney, from which daylight can be glimpsed 20 metres above, and to two hollows in the ground. These depressions are the remnants of the two major excavations of the cave, dated 1823 and 1912.

Goat’s Hole was first excavated in 1822 by Mr. L W Dillwyn and Miss Talbot of Penrice Castle. Interested by the discoveries made here, the Very Reverend Dr. William Buckley re-excavated the cave the following year. It was during this secondary and more substantial exploration that one of the World’s most important archaeological finds was uncovered. At the time, however, the discovery was completely misidentified. Buckley was the first Professor of Geology at Oxford at the time and was later to become Dean of Westminster. He was also a devout Christian and it was this latter fact that led Buckley into not recognising the full importance of his find.

Buckland believed that no animal or human remains could be dated earlier than the Great Flood that is recorded in the Bible. Misguided by his religious preconceptions, his dating of the skeleton was wildly off the mark. Another misconception of his also guided him into misjudging the sex of the skeleton as well.